Three pious women follow God’s calling to find their purpose in the West. Following His path, they will find the family they belong to. Will they understand that God knows better what we seek in life and where our true purpose lies? Three of my best-selling Christian Historical Romance stories in a single Inspirational Collection! It’s time to stay home and enjoy them!

Combined the three books have more than 635 positive reviews on Amazon and have been downloaded over 32,000 times!

If you like an overlooked but determined heroine whose prayers guide her in the harsh Old West, and she experiences a heartfelt romance in an era that the Lord’s guidance is crucial, read on!

#1 A Godsent Governess for his Tormented Family

After her father’s untimely death, Emma follows God’s call and travels West to become a governess.  Paul needs to take care of his boisterous young son after his wife’s tragic death, and he feels forsaken by God. An undeniable attraction draws Emma and Paul closer together. But when their true enemies are revealed and loyalties are tested, will they be safe under God’s divine embrace?

#2 Blessed are Those Who Dare to Love

When Eleanor is promised to marry a corrupt suitor, she flees out West, following God’s call, but a surprise awaits her. The man she corresponded with is dead, and she has no choice but to marry his grumpy brother. Calvin never believed his life could get any worse until the day he lost his brother, yet with Eleanor on his doorstep, he thinks God mocks him again. God brought these two souls together, but will His love dissipate the lurking threats set to break them apart?

#3 A Miracle Leads Her to the Cowboy’s Heart

God’s plan leads Faith to the ranch of a mysterious rancher, where she comes face to face with the little boy she kept dreaming of. Oliver prays every day to God to give him a sign to continue his life. Finding a fainted woman in his territory isn’t what he expected. Faith and Oliver know that their meeting is God’s plan. How can they stay true to God’s calling when everything around them is falling apart?

Here are my best selling books that I included in my Book Collection "Three Brides Following God's Calling"! 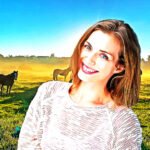