Is there any second chance in love? How can you stop living in the past – forgive and forget? These three brides are set on finding out. Three of my best-selling Western Historical Romance stories in a single Collection! It is time to stay home and enjoy them!

Combined, the three books have been downloaded over 28,000 times!

When the strong yet sensitive Tori Ridley brings the local physician to her ranch to tend to her daughter’s burns, after a sudden fire, her wounded heart skipped a beat when she met him for the first time. But Jessie Hutton is a man whose soldier’s past keeps on chasing him and spending a year in this new city has helped him reevaluate his life so far, and his only way out of his battle wounds. They tried building up a long-forgotten dream, but the past is catching up on them. How will they protect their love growing out of ashes?

#2 A Sheriff’s Haven for the Rebellious Bride

When the feisty and beautiful Bree O’Laney tried to escape an arranged marriage with a man she despised, she applied as a governess for the widowed Sheriff. But Sheriff Maxwell Banks is a man with a kind but fierce heart who tries to recover the loss of his wife and his only concern is his daughter. As Bree and Maxwell get closer, her hidden past will come knocking on the door – and Maxwell will not be very happy to answer it. What happens when a Sheriff falls in love with a bride with criminal origins?

#3 A Love Behind the Broken Mask

Although the stubborn yet stunning Eloise Hastings is dreaming of marrying out of love and running her family’s ranch, her father has different plans, arranging a marriage for her with his business partner. But when her childhood love, Wilson Pace, returns to town ready to ask for her hand, their world was shaken up, when at the St. George Hotel’s Masquerade ball, the Sheriff is murdered, and all evidence points at him! How can they prove his innocence and save their love on the same night?

Click to read "Three Last Chance Brides in the West"!

Here are my best selling books that I included in my Book Collection "Three Last Chance Brides in the West"! 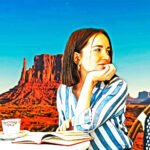