When push comes to shove, and God leaves but a fraction of light to follow, these three brides will follow His will out West. How can they fall in love with the men our Lord has chosen for them when it seems too difficult to be happy in a marriage of convenience? Follow three of my bestselling stories in a single Inspiring Collection! It’s time to stay home and enjoy them!

Combined the three books have more than 1080 positive reviews on Amazon and have been downloaded over 43,000 times!

If you love to read about adventurous women and the men who love them with inspirational endings, read on!

#1 A Divine Love Out of the Embers

Alice has grown up with her Godless and abusive father in an isolated village. When push comes to shove, she finds the courage to respond to a mail-order bride ad and she flees out West. Samuel has witnessed the ills of war and he still carries those scars with him. To tie the knot with a stranger who fears his eyes and touch is a great challenge. Yet, getting to know Alice, he realizes that the woman has lived through hell and only God’s word was her safe haven. How can they reveal their deep love for each other when Alice’s past catches up on her?

When Emma realizes that her fiancé is a ruthless man who will not respect her as husbands do their wives before God, she flees out West. Getting married to the mysterious Joseph though, she just has too much on her plate. After he was backstabbed by his fiancé and best friend, Joseph has decided to live as a recluse. He accepts his sister’s idea for a mail-order bride, though, in order to finally have someone around to help with his ranch. Falling in love, though, with Emma isn’t in his plans. Will they manage to create their own land of happiness?

Evelina has suffered a lot of tragedy in her life. Now that her ranch is falling apart, though, she has no other choice but to ask for a mail-order groom. Meeting Joshua makes her heartbeat go faster. Joshua is a lonely cowboy who has recently lost his father. He is now left with a ranch full of debts and creditors harassing him. God sends him a message through in his dream, and he is ready to trust His plan and follow the sign. Will they manage to fight off the bad weeds with their rekindled faith and newfound love?

Each book features a standalone, clean inspirational romance. No cheating, no cliffhangers, and a strong, sweet happily ever after.

Here are my best selling books that I included in my Book Collection "God's Grace Calls Upon Three Brides"! 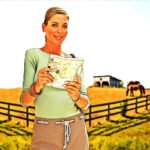